Democrat Fraud in the 2018 Election - Investigate and Expose Before 2020 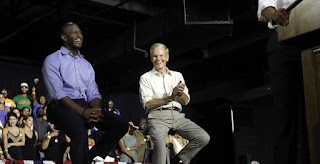 Hard to believe that two weeks after the 2018 midterms, races are still be decided by "found votes", votes that exceed registered people to produce that number, and Republican candidates announced as winners were suddenly losers as more ballots were discovered. This isn't a new occurrence, it happens time to time in election history. Democrats who have decried voter-ID (for obvious reasons), shout their mantra of "count every vote", while it's countered with "count every LEGAL vote", have spread across news stories coast to coast.


No other hotbed compares to the confusion than the usual suspects of Broward and Dade County Florida, but specifically Broward County. Current elections supervisor Brenda Snipes is under fire for what appears to be the largest example of incompetence in the history of elections. It's not the first time for Snipes either. Example.

-- A court ruled she had broken election law when she destroyed ballots from the 2016 election 12 months after it, instead of the 22 months required by federal law.
Broward elections supervisor illegally destroyed ballots in Wasserman Schultz race, judge rules

-- A medical marijuana amendment was left off some ballots in 2016.

-- Election results in the 2016 primary were posted on the elections office’s website before polls closed, another violation of election law.

-- In 2012, almost 1,000 uncounted ballots were discovered a week after the election

-- In 2004, some 58,000 mail-in ballots were not delivered to voters, leaving election officials to scramble to send new ones."

Now after numerous starts and stops and a failure to properly submit results, and two law-suits who ruled against her, one, for violating Florida law, she is again at the end of a complete screw up the recount of Florida.

Now that the counting is done and both DeSantis and Scott have come out victorious, the looming question remains is how to prevent Democrats from pulling the same election-games in 2020. I have no doubt that Florida election results would have been very different had conservative media, bloggers, activist not descended on Broward County - and even Palm Beach counties and put eyes on what was going up.

More specifically Broward County where an astounding 80,000 votes "appeared" just days after the election where Rick Scott's lead of 55,000 was reduced to 12,000 vote, which is nearly mathematically impossible.

This "magic" happened all around the country in the days after the election. True, some expansion of votes is due to absentee and mail-in ballots, but as we saw in Florida some of it is also because of malfeasance, and just plain cheating. I believe that if it had not be for the expanded focus on South Florida by media, the GOP of Florida and activists the end result may have been much different.

That needs to be fine-tuned as we move to 2020 so the Democratic Party is on notice that it won't be tolerated, it will be exposed and we will fight back.
2018 Midterms 2020 Presidential Election Democrat Cheating