No Comparison between Hillary Clinton and Ivanka's private Emails 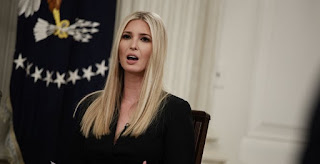 Big huffing and puffing in liberal media today. It's been discovered that Ivanka Trump used private email - you know just like Hillary Clinton! Well, not so much.

White House ethics officials learned of Trump’s repeated use of personal email when reviewing emails gathered last fall by five Cabinet agencies to respond to a public records lawsuit. That review revealed that throughout much of 2017, she often discussed or relayed official White House business using a private email account with a domain that she shares with her husband, Jared Kushner.

The discovery alarmed some advisers to President Trump, who feared that his daughter’s practices bore similarities to the personal email use of Hillary Clinton, an issue he made a focus of his 2016 campaign. Trump attacked his Democratic challenger as untrustworthy and dubbed her “Crooked Hillary” for using a personal email account as secretary of state.

Some aides were startled by the volume of Ivanka Trump’s personal emails — and taken aback by her response when questioned about the practice. Trump said she was not familiar with some details of the rules, according to people with knowledge of her reaction.

In a statement, Peter Mirijanian, a spokesman for Lowell, acknowledged that the president’s daughter occasionally used her private email before she was briefed on the rules, but he said none of her messages contained classified information.

“While transitioning into government, after she was given an official account but until the White House provided her the same guidance they had given others who started before she did, Ms. Trump sometimes used her personal account, almost always for logistics and scheduling concerning her family,” he said in a statement.

Austin Evers, executive director of the liberal watchdog group American Oversight, whose record requests sparked the White House discovery, said it strained credulity that Trump’s daughter did not know that government officials should not use private emails for official business.

“There’s the obvious hypocrisy that her father ran on the misuse of personal email as a central tenet of his campaign,” Evers said. “There is no reasonable suggestion that she didn’t know better. Clearly everyone joining the Trump administration should have been on high alert about personal email use.”

Ivanka Trump and her husband set up personal emails with the domain “ijkfamily.com” through a Microsoft system in December 2016, as they were preparing to move to Washington so Kushner could join the White House, according to people familiar with the arrangement.

The couple’s emails are prescreened by the Trump Organization for security problems such as viruses but are stored by Microsoft, the people said.

A few problems with this story.

1. Ivanka wasn't a Secretary of State, running an undeclosed email server from her basement, in a highly classified position.

2. The White House discovered this and corrected the issue - more of training than of something nefarious as Clinton was.

3 Ivanka wasn't a first lady, former Senator on the Arms Services Committee, and four other committees, and Secretary of State who knew full well of what classified and unclassified meant.

Ignorance isn't an excuse for violating law, but there is no evidence any law was violated. Ivanka's email was more of a personal family nature. Not state secrets, and most important Ivanka's emails are present and accounted for. Not like the 33,000 missing from Hillary's server.
Hillary Clinton Hillary Clinton email scandal Ivanka Trump