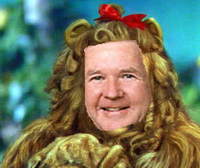 Will Congressman "Chicken Little" Murtha now issue an apology. Back here, he said of Haditha:

"There has to have been a coverup of this thing," Rep. John P. Murtha (Pa.), ranking Democrat on the House Appropriations defense subcommittee, charged in an interview on ABC's "This Week." "No question about it."

Yeah, via the La Times

"The general charged with investigating whether Marines tried to cover up the killing of 24 civilians in Haditha has completed his report, finding that Marine officers failed to ask the right questions, an official close to the investigation said Friday.

Nothing in the report points to a "knowing cover-up" of the facts by the officers supervising the Marines involved in the November incident, the official said. Rather, he said, officers from the company level through the staff of the 2nd Marine Expeditionary Force in Baghdad failed to demand "a thorough explanation" of what happened in Haditha."

Don't hold your breath waiting for the apology from Murtha. He's just a figment of the the left and their "drive-by, talk out of ur ass, say anything to raise a ruckus" crappola. Murtha is becoming a really bad cartoon as did Cindy Sheehan and the rest of the rabid left.

More about Murtha at Hotair (see pic below), and a h/t to Michelle Malkin.